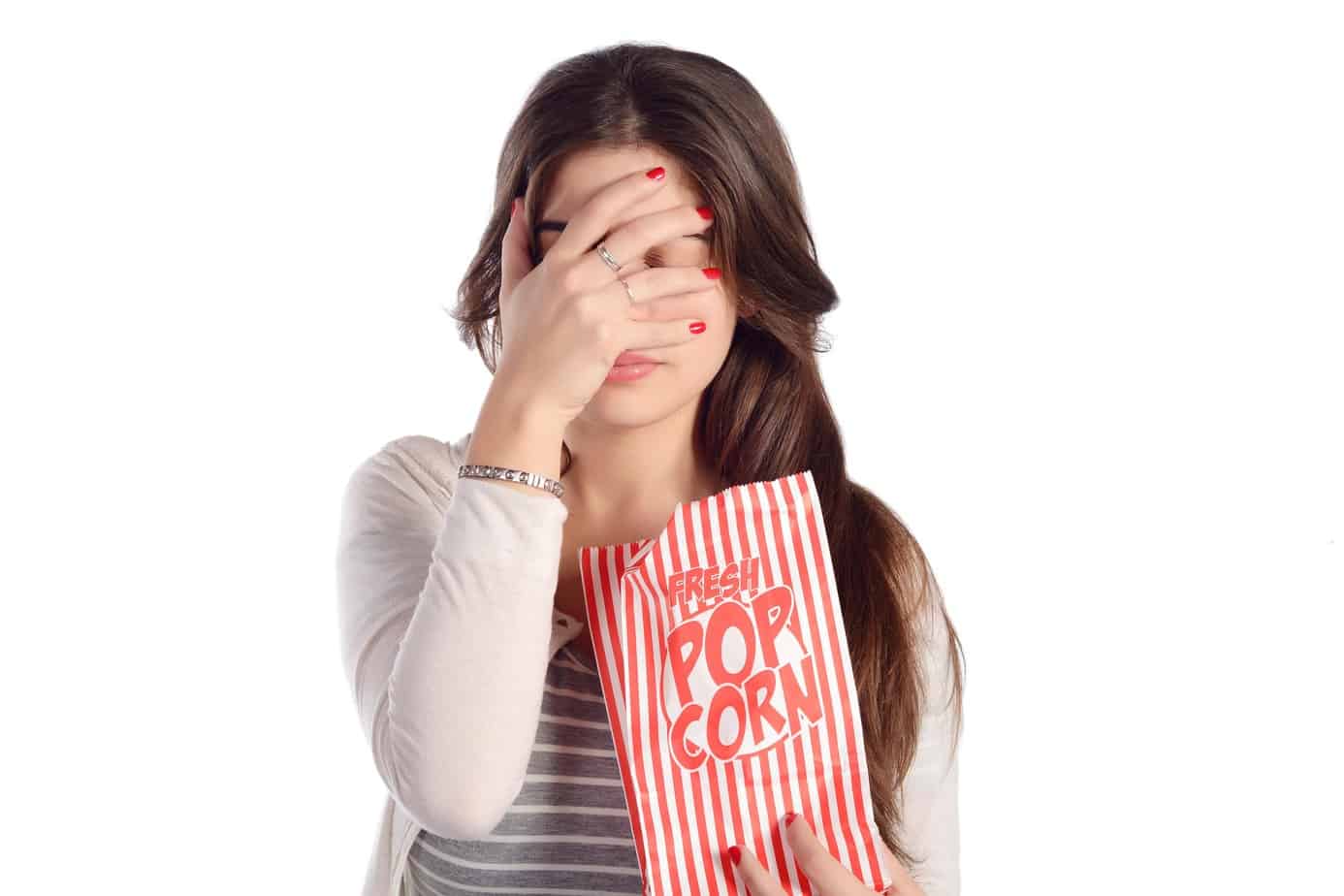 Can you watch scary movies while pregnant

So, it’s Friday night, you’ve had a big week and you’re keen for a night in, curled up on the couch in your pajamas with some popcorn, binge-watching your favorite horror flicks. But you’ve also recently found out that you’re pregnant. Congrats! Your significant other is concerned that watching a horror film may scar your unborn child for life before it’s even entered the world. Is he completely crazy? Or could there be some truth to his madness? Well, let’s do some research and find out.

So… Can Pregnant Women Watch Horror Movies? Yes and no, there are no set rules to say that a pregnant woman is not allowed to watch a horror film. Your doctor is not going to sit you down and tell you you aren’t allowed to watch certain films or listen to certain music. However, many people do insist that watching such movies while pregnant can indeed be damaging to an unborn baby.

Why? Most likely because of the stress and tension such a film may cause to the mother. When a pregnant woman gets overly stressed, her hormone levels change, and this can be harmful to the baby.

Such stress on an unborn baby can cause issues to the child later on in life, such as anxiety disorders or problems with concentration and learning difficulties.

Of course, too much stress on an expectant mother can also, in very rare cases, cause premature delivery of the baby or even stillbirth. Whether or not a horror movie can cause THAT much stress, however, is another question.

P.S: If you want to learn how to stay organized and on task with super helpful checklists and to-do lists for every stage of pregnancy (even the “4th trimester!”) – Click here.

What is A Horror Movie?

Put simply, a horror movie is a film usually intended to scare its viewers. The topics of a good horror film are generally unsettling, sometimes gruesome and often violent.

At the very least, a decent horror movie should leave you feeling a little rattled. We generally watch them because, for whatever reason, we enjoy being frightened.

We get a kick out of being scared out of our mind for a few hours at a time. Kind of crazy when you think about it, right?

So, it does make sense that there may be some concern about the effect such films might have on the already sensitive body (and emotional state) of a pregnant woman and her unborn baby.

So, is there any truth to this? Or is it simply an old wives tale?

Well, let’s put it this way – in Chinese superstition, it’s believed that if you look at pictures of cute babies while you’re pregnant, you will have a cute baby.

So if you think about it in that sense, it’s not surprising that women are discouraged from watching things like horror movies whilst pregnant.

However, when thinking about it more logically, there is no scientific proof that watching a horror film whilst pregnant has any effect on the unborn baby. It’s a matter of opinion.

Watching a horror film is certainly not going to cause the kind of physical damage to an unborn baby than smoking or drinking alcohol during pregnancy would.

Of course, what we do know, is that putting added stress on an expectant mother unnecessarily is never a great idea. But make of that what you will. It’s fair to say that this particular decision is a personal one. During pregnancy, women are dictated to about so many things they can and can’t do. You can’t eat this and can’t drink that. You have to eat this and have to take that supplement.

This brand of baby product is the best, whereas that one is the worst.

It goes on and on. But which movies you watch as a mama-to-be, surely that decision should be yours to make based on what you feel is right for yourself and your baby.

Will Watching Horror Movies When Pregnant Affect the Unborn Baby?

No, not necessarily, but that being said, if horror films aren’t usually your kind of thing, and you find them very scary or unsettling, then perhaps watching them during your pregnancy may not be the best idea.

After all, putting any added stress on your body whilst carrying your precious bundle of joy can’t be a good thing, right?

If you normally feel uncomfortable and stressed during a horror film, then it’s fair to say you will feel that on a larger scale whilst pregnant.

On the other hand, if you love your horror films, they bring you pleasure and you’re used to watching them, there’s no reason to think that your baby will be affected in any way by watching such a movie whilst pregnant.

It comes down to what you’re used to, and how you handle such films emotionally. Again, you are the only person qualified to make that call for yourself and your baby.

Things to Consider While Watching Horror Movies during Pregnancy

Pregnancy, in general, will make you more sensitive and emotional, so it’s a good idea to keep that in mind if you are going to break out the horror flicks for your movie night.

It’s also worth bearing in mind that by week 24 of your pregnancy, your baby is essentially fully developed – so bubs can hear everything going on in the big wide world whilst still in your tummy.

This means if you’re watching something particularly noisy or jumpy (such as a gory horror movie with lots of screaming and gunshots etc.), the baby may become unsettled and respond by moving around or kicking more than usual, which could be a little uncomfortable for you.

Another point to consider regarding the sound factor is the effect those particular kinds of sounds will have on the baby.

For example, many people believe that playing classical music to an unborn baby can have a positive effect on the child’s personality, helping to ensure the baby is very calm once it is born.

It is also believed such music can have an impact on the child’s brain development, making the child more intelligent than if classical music was not played.

So, bearing that in mind, you have to wonder what kind of effect the sounds of blood-curdling screams might have on bubs.

I mean, surely that can’t be good.

It’s fair to assume that one horror movie may not have a lasting effect on a child’s mental state, however, what if you are a regular horror movie viewer?

If your unborn baby is exposed to the sounds of violence, screaming, guns, shouting and swearing, over and over again whilst in the womb, surely this couldn’t have a positive effect on bubs, right?

It wouldn’t be completely crazy to assume that the unborn child could experience anger issues, be violent, suffer anxiety issues or worse. It’s certainly something to consider.

If you’re heavily pregnant, even just sitting in the cinema for a few hours might be uncomfortable for you.

Cinemas are loud, and let’s be honest – you may need to use the bathroom multiple times which is no fun for anyone.

So, if you’re desperate to watch a good horror flick, consider watching it at home where you can be comfortable and in control of your surroundings (and the volume button).

Only you know what affect horror movies have on you.

If you know they have little to no effect on your emotions and stress levels, then go ahead and enjoy your movie.

However, if you know they affect you negatively, bear this in mind when deciding whether or not to watch such a film whilst pregnant.

Your baby should, of course, come first so if you think there’s a possibility the movie is going to upset you and cause you added stress, maybe give it a miss and throw on your favorite rom-com instead. There will be plenty of time for you to binge your favorite horrors once bubs are born and in bed for the night.

Pregnancy is a beautiful and crucial time for both you and your baby.

The most important things for you both are to ensure that you are healthy and happy. I

If you find these types of movies stressful or upsetting, it would most likely be a wise decision to avoid them during your pregnancy.

After all, there is absolutely nothing worth putting your baby or yourself under any unnecessary extra stress. Enjoy your pregnancy, enjoy your movies, and most importantly, enjoy your precious new bundle of joy!

>>> LEARN HOW TO PREPARE FOR YOUR PRECIOUS BABY BY CLICKING HERE! <<<

This site uses Akismet to reduce spam. Learn how your comment data is processed.

Hey there! I am super excited you are here! This site is dedicated to us moms who are out here trying to live their best life.